About the Anne Queen Faculty Commons

About the Anne Queen Faculty Commons at the Campus Y

Renovated and opened in 2007 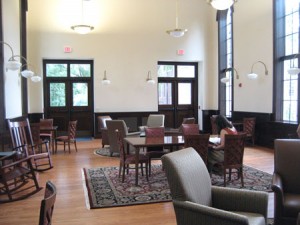 During the renovation of the Campus Y building, the Board of Trustees and the Office of the Provost determined that the Anne Queen Faculty Commons room should be a calm, welcoming place that affords faculty the opportunity to meet with colleagues and engage in discussion of matters of current concern on campus, as well as a place to relax. The planners sought to provide space on the central campus for informal gatherings, meetings, and programs that encourage faculty exchange.

To those ends, the Anne Queen Faculty Commons has been furnished with comfortable club chairs in small conversation groupings, as well as several tables seating three to six people. Arranged this way, seating for thirty people is available. The room is well suited to small groups meeting for coffee or lunch, as well as to individuals seeking a quiet space to read or work. It can also be arranged to accommodate somewhat larger receptions or programs involving up to about 75 people. Additional seating is available by request from Facilities Services, but the furniture must be picked up during the reserved period and removed from the Campus Y building. The Campus Y will not store furniture before and after events. There is no audiovisual equipment in the room.