At the December 6, 2019 Meeting of the Faculty Council and General Faculty, Chair of the Faculty Lloyd Kramer gave the following remarks about the recently announced Board of Governors’ agreement on the Confederate monument known as “Silent Sam.”

The most important new issue to emerge since last month’s Faculty Council meeting is the recently announced BOG agreement to transfer the Silent Sam statue to the NC “Sons of Confederate Veterans” and to set up a Trust Fund of $2.5 million for the SCV. This fund will be used to house and protect the monument in one of the 86 NC counties where there is no UNC System university.

I stressed in last month’s discussion of the 1619 Symposium at the Stone Center that the legacies of slavery have continued throughout the centuries to 1719, 1819, 1919 and now 2019. We’re facing another example of this legacy with the BOG agreement that transfers Silent Sam and obliges UNC to give the Sons of Confederate Veterans millions of dollars for a trust fund, which strikes many faculty as a kind 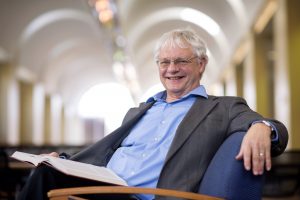 of “reparations payment” to a group that claims it was somehow damaged by the removal of Silent Sam from our campus.

I have talked this week with people outside the University who have asked about faculty views of the BOG’s agreement, and so as Chair of the Faculty I want to briefly summarize why so many faculty colleagues have good reasons to be angry about the finances of this agreement. This anger comes partly from frustrations about spending such money when faculty, staff, and students face ongoing salary and funding needs. But I want to refer mainly to the broader concerns I’ve heard.

Although our faculty, staff, administrative leaders, and students overwhelmingly agree that Silent Sam should not be returned to our campus (as the Agreement ensures), people are angered to see our much-needed University money go to an organization that tells lies about the Civil War and promotes the legacy of white supremacy in our state.

The SCV’s website turns history upside down by stating that the “preservation of liberty and freedom was the motivating factor in the South’s Decision to fight” what it calls the “Second American Revolution.” The Confederacy was actually established to preserve racist oppression and the continuing enslavement of millions of people; and historians have been explaining this historical reality with clear evidence for generations.

Yet the lies of groups like the SCV have long influenced public opinion; and a recent poll at Elon University found that 49% of North Carolinians still believe the Civil War was mainly about states’ rights; only 44% said the Civil War was about slavery and the defense or destruction of the slave system.

The Board of Governors is thus making our University give trust fund money to an organization that lies about history and describes the Confederacy’s defense of a white supremacy slave system as a campaign for the “preservation of freedom.” Our University is committed to the systematic pursuit of truth and knowledge through the careful examination of empirical evidence. Giving money to the SCV thus goes against our own core values. Many North Carolinians may share the SCV’s views of the Civil War, just as there are people who deny the historical truth of the Holocaust or the scientific evidence for climate change.

There are also people who believe the earth is flat. But the University would never set up a $2.5 million trust fund for the Flat Earth Society or for a group that denies the Holocaust. This trust fund becomes all the more problematic when we read a letter from the “Commander” of the SCV, Kevin Stone that says: “What we have accomplished is something that I never dreamed we could accomplish in a thousand years, and all at the expense of the University itself.”

I’m pretty sure that the Commander is referring to the University’s financial expense, but faculty are angered that the cost of this agreement goes far beyond the 2.5 million dollars. It also carries a steep cost to our respect for knowledge and the search for empirical truth; and it contradicts our own strongly avowed rejection of racism and white supremacist ideas and groups. The BOG must have never consulted with historians or others who could explain that we are giving money to a group that lies about the past and still defends the racist Confederate lost cause in the present.

So this is our challenge as a University: how do we find a constructive way forward? How do we honor and support and promote the work of those who are challenging the racist legacies of 1619 and the slave system and the Confederacy?

At the November Council meeting, I noted the great work of people like this year’s Distinguished Alumni Award recipient Nikole Hannah-Jones, who led the important 1619 project at the New York Times, and our own well-informed historians, including my colleagues William Sturkey, Fitz Brundage and Jim Leloudis who interpret history for both public audiences and our University. I also noted Chancellor Guskiewicz’s plan to develop a UNC commission on “History, Race, and a Way Forward.”

As we examine the implications of the BOG’s Agreement with the SCV, this work becomes all the more urgent. Silent Sam is like the zombie of our University: it carries the legacy of the Confederacy, and it keeps reappearing as a symbolic expression of slave-system armies and of the pervasive racism in Jim Crow-era NC. So our challenge for the New Year is this: How can we escape this awful zombie that haunts UNC, even as we try to get rid of it forever? There are no simple answers or solutions, but the discussion and the search for a different future must continue through bold actions.